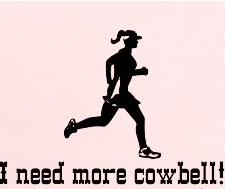 I’m quite pleased that I was able to participate in SC this year because I’ve been all sorts of "not running healthy" since the late summer. To the doctors' offices. Primed for a conservative and non-runner response, I asked my Ortho. in September if running a fall marathon was out of the question. He said, “Well, I really don’t think it’s a good idea.” He added I should hold off all running until he knew more about what was going on (or what wasn’t going on) in my various limbs and spine. I did as I was told (for once) and didn't run or engage in high impact sports, like rugby or touch football. Two weeks before the marathon (after lots of XRays, three MRIs, a trip to Mass General and a mending sprained toe) he cleared me to exercise! “Emily, you can gradually start to exercise. You might even try to run a bit.” Sha-wing! 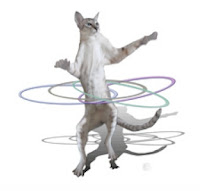 Awesome, I told him I would try to walk at least part of the marathon and see what happened. If all felt good,  I’d continue. If I felt pain I would stop, etc. He didn’t protest nor applaud. BUT his eyebrows narrowed, he tipped his head forward as he shifted in his chair,  "Be careful. You have been very hard on your body.”  Prior to that, I met with another doctor who also reviewed my MRIs, to which he responded, “you're as strong as an ox!” Scottish Highland Cattle are cute, so his strange “compliment” inspired me.

My 6:09 finish was my slowest marathon to date. It was also my happiest (ok, a tie with my first 50k.) No GI issues at all, no lasting damage and an awesome boost for my distance spirits. I needed that. I had no mileage in the log books apart from a 55 mile bike ride in August and a 2+ hour, Halloween Hike in Dave's woods. (photos by Keith Mangus)
I power-walked the first 5 miles — a few of which were with Dan who stayed with me for 25 minutes (twice as long as he set out to do, THANK YOU). I promised myself I would PW to the first aid station/5 miles and see how I felt before either “calling it a day,” or beginning to wog a bit. I felt great and powered onward. I did run in the full last mile, Hoorah!

walk + jog = WOG
I wogged  a bit and walked nearly all of the inclines, declines and flats. If I strung together all the 100-200 foot jogging section, I estimate I wogged 7 to 7.5 miles total. The rest was accomplished by a heart pumping power walk. I was once told that my fast walking pace proved that “leg length has nothing to do with speed.” I wonder if that’s true.

After that I jumped into a down sleeping bag and watched and waited until the TUG peeps come through their 50 mile laps and finishes! Thanks to Dave M. for the photo (me in orange), the cookies, and a refreshing Moxie. 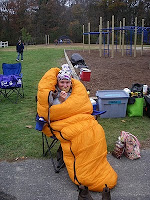 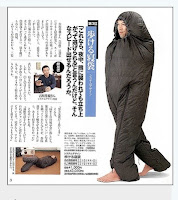