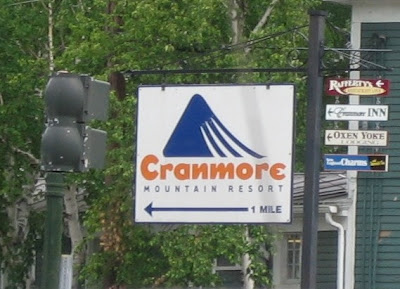 The 2009 Cranmore Hill Climb was the fourth of six races in the Inov-8 USATF-NE Mountain Circuit. Era molta competitiva! Not only was it the USA & NACAC Mountain Championships but also a USA Mountain Running Team Qualifying Race. This meant that the top three US men and first US woman earned an automatic spot on the US Team, which will compete in September's 25th World Mountain Running Championships in Valchiavenna, Italy's Northern Lombardy region.
The air at Cranmore Mountain was thick with humidity, nerves and a competitive spirit! The course this year was TWO laps up and down the mountain slopes. I found two different distances published for the single loop at 5.5k and 5.8k. Still, the overall elevation gain and descent was a total of 2400 feet! 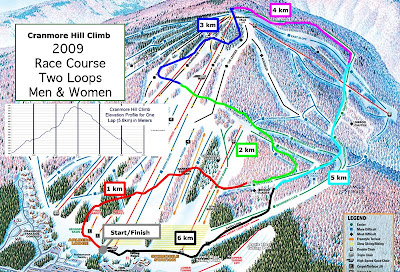 Original map from the White Mtn Milers: here.
A link to their photos of the course.
As a back-of-the-packer, I tried to stay out of the way and yelled "RUNNER," as the top 12+ men stormed by through the mud. While I rolled down the upper Gibson trail (the 5th-k of my first loop), the overall male champion, Joe Grey, flew by with a HUGE gap of about 5+ minutes before Zac Freudenburg, the second male passed. Then came the third and fourth men, Matt Byrne and Rickey Gates, who were only 12-15 feet apart, which made me extremely excited given ONLY the top 3 men place for the US Team! How thrilling to witness the efficiency of the top competing NACAC male runners grace these down hills! Che Gambe!!
Holy fell running, mountain goats!
Some fell running tips.
Along Lucky Loop (in the 6th k), Jim Johnson passed me and casually said "hello." There he was, one of the top male runners, with enough composure and breath to greet me. Impressive. What tops this, was that he was finishing up his entire race (in approx. 53 minutes!), as I completed my first lap in about 54-55. When I came through the base to begin another round, Simon Gutierrez said "Good job!" I mustered, "You, too," and began my second Flying-Carpet ride. I am grateful for the friendly fast folks; the support from the pack's front to the back and to the front again goes a LONG way to creating world mountain running peace.

She'll be coming down the mountain when she comes: 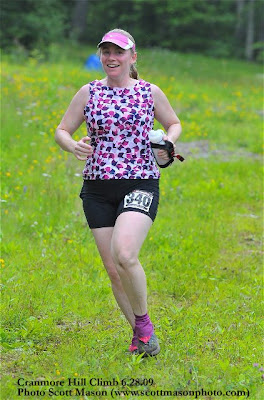 My legs Fellt the remnant cobwebs of the Mount Washington Road Race from the week before so I promised myself that I would participate in Cranky-no-More for the mere pleasure of the completing another mountain circuit race. (Versus, what?) I am pretty certain others had similar ideas except for maybe the front 1/3 runners.

Last week I had Fred Ross to thank for nudging me up that rock pile and eventually "pulling" me into the last .6 miles of MWRR! For Cranmore, I wisely followed Donna S.'s cue and brought my hand-held water bottle. Grazie mille!

So far, Cranmore is my second favorite race in the circuit next to Wachusett 's new trail-mix course. By power-hiking the ups, jogging the flats and somersaulting the downhills, I was able to conserve energy, enjoy the ride and chat with folks for both loops. I also continued to appreciate the views, the moss and keep an eye out for blueberry-seeking bears in heat. (No such luck.)

Scott Mason was out and collected many photos of frisky folks with his wide-angle.
Ken Skier, "a master mountain sweeper," was also out gathering candids.

Cranmore 2009 RESULTS—IN PROGRESS.
If you raced with a watch and know your finishing time, e-mail the time & your bib number to pkirsch@roadrunner.com.
Posted by Trail Pixie Trespas

You're over the hump now. Only two more to go. I bet you'll miss it when the series is over although I have no idea why ;-).

You're tougher then me. Way to make it mt. 2 more races to go.

Hey, glad you had a good run! Sometimes its really nice to be able to enjoy the run and the view! :) Still want to hook up and run sometime...and I need to talk with you about gaiters!!!