* H x 4 = Heat Humidity & Hellacious Hills.
Most of my late-spring running revolved around preparing for the 50th Mount Washington Road Race on June 19th. This commenced with a trail ultra of 29-miles on Mother’s Day, followed a week later with the 24k Soapstone Mountain Race. Wadda Scorchah!
Capping off May, I enjoyed the road & trail mix of Mount Wachusett, as well as reuniting with many of the 2009 Mountain Goats who were hoofing at the starting line! 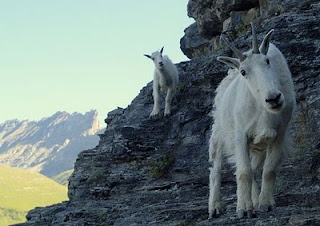 "What do you mean you aren't doing
the 2010 Mountain Circuit?!"
The first weekend in June, I drove to Wilton, NH,  for my 3rd (slowest and happiest and hottest) Pack Monadnock 10 miler. Despite the hellish heat, the run was high heaven! At the summit, someone very special to me awaited! Overall, I felt great that day and power-walked the hills, dressed comfortably and hydrated wisely. 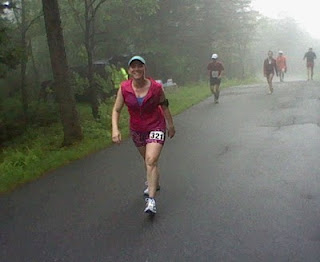 (Photo by Chris C’s son)
Pack is mostly a paved course—with some excellent dirt road sections—so thankfully my feet held up. The only area that slightly ached was my right hip along at the stretch of cambered highway before Miller State Park.

In general, I’m slowing down my pace and enjoying myself a heck of a lot more. Even 30 seconds to a minute per mile makes a huge difference in how I feel finishing and the day following the race.

The week before MWRR, D and I headed to Newport, NH to run 6 In The Stix, which is part of the Western NH Trail Running Series. I needed the motivation of a group to get in a last hilly effort. Of course, like at The Pack, it rained. D is the most cheerful umbrella and rain jacket toting fan I have. Thank you!


When I queried about the trails in the 6 In The Stix, a runner responded, “it’s a real trail race with rocks and roots!” How enticing! How so my bailiwick! 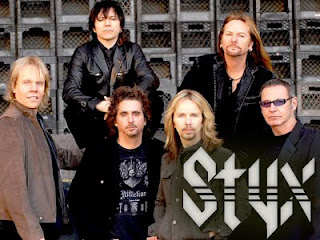 NO...Not this Six from Styx!
If you are a good up- and down hill trail runner, the course is fast! My favorite aspect was the variety of footing. Starting and finishing on a track, the race quickly disappeared into the woods along double- and single-wide trails adorned with rocks and roots. Asphalt was minimal and bridges abounded. A sandier sections were rewarded with gentle pine needle passages. The final cherry? A stair climb to the top of the ski jump!