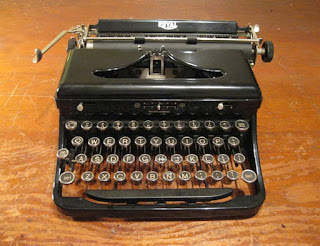 Royal Portable Standard, c.1935
Sometimes I can't help myself. Like today. I saw this beautiful relic and without pause it was paid for and on its way to my desk for some clippetty-clap-tappetty-tap tap brrring, crriiick click clik, ding. 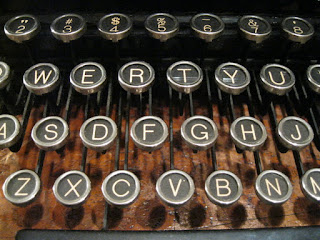 I wrote a letter to my mom and dad. I miss them since they moved away. And when I see typewriters, I think of my father.  We spent a lot of time cleaning out his brother-in-law's house who kept a typewriter or two. Like my uncle, my dad saved a lot of stuff, which was a normal part life during the Depression. I am grateful for their keeping collection; it continues to teach me about history, reusing and appreciating design. I inherited my first typewriter from my father and on it I typed out many school reports like he did during his college years. Yes, I still have that typewriter and will post about the other members of the fleet eventually.  For now, I welcome my "Model O" to the family. 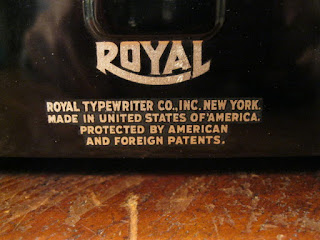 How often do we see this?
Royal Portable Standard
"This model is frequently referred to as "Touch Control" because that is the only labeling to be found aside from the Royal logo... Many collectors refer to it as the Model O because the serial number carries an "O" prefix. Officially, Royal called this the Portable Standard. It's unclear exactly when this body style was introduced; the earliest example I have seen dates to 1934. Later versions have a raised, wear-resistant logo on the paper rest.

The Standard/Touch Control/Model O is one of the most frequently found pre-war portables, and its commonality causes many collectors pass it over. Yet this is classic 1930s design, and a terrific typer for actual use."   From Machines of Loving Grace.
Links:
The Museum of Printing

It is beautiful..I can understand why you bought it....I love to hand write letters..I just wrote a letter to Roy my first in over a year..it is nice to step away from the new and go back to something that flourished when times were slower and simpler...good for you sweets...a wonderful purchase..

We share a love for eclectic antiques Em... nice find!!

If you didn't see this the first time I shared, I wanted to be sure you (and readers) had a chance to view. This model isn't included, but this is still a fascinating take on the history of the typewriter:

background from the videographer:
http://www.frieze.com/issue/review/ignacio_uriarte/

It's beautiful! If I write you a letter with my fountain pen, will you write me back with the typewriter?

kZ, That Was not what i expecyed. happillyy delightedly impressed by michael wInslow. Wow.

Michers, I might drop my Verizon plan and switch to a Trac phone. Today I prnted on a Vharles Bran Press. Bringon the abacus, baby.