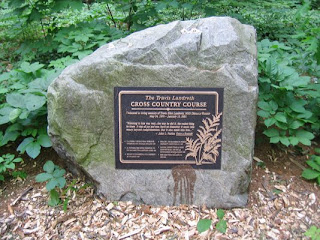 All proceeds benefit the Travis Eliot Landreth Memorial Scholarship Fund. If you aren't running too fast you can see his memorial rock with a plaque around the race's mile mark.
The 480-acre Maudslay State Park boasts wonderful meadows, pine forests, 19th century gardens, wide trails along the Merrimack River, and "one of the largest naturally-occurring stands of mountain laurel in eastern Massachusetts." I love running here not only for the park features but also for its permanent "aid station" water-bubbler and bathroom. 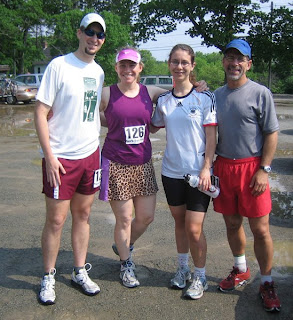 I brought Vivian W from Phillips Academy (via Oregon) to have some fun and we met up with Running Rob and Breakheart Dan. When I headed for my bib number, I heard the familiar voice of Double-d, "Look at that outfit!" I couldn't resist wearing my animal-print running skirt!

While I am not fast like cheetah—I am frisky.
Wachusett Mountain race was the day before so dd and I compared notes on our fatigued quads. I deduced that his were a lot more sore than mine because he ran over 20 minutes faster than I did at Wachusett and then posted a sub-17 Trav's. These mountain cats! (Inset below: Cathy D and Trail Pixie pose in a small coalition.) 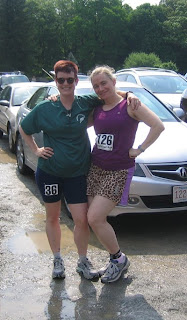 Having put in a good effort up the mountain the day before, I was realistic with my goals for Trav's. I told Dan S I planned on 9 minute miles. Success. I was not sucked into the "racing vortex" and stuck to my pre-plan. Considering I was never winded on the ascents, finished comfortably with a smile, and earned ENETRS points, I felt happy about this being my most leisurely Trav's yet.
I will test the 70-mph speed of my cheetah skirt in another venue! RRRrr-OOwwww. 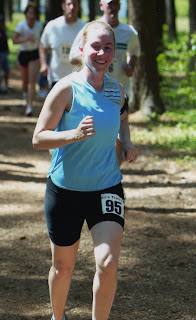 Here are three videos from the day from muisephoto via youtube. 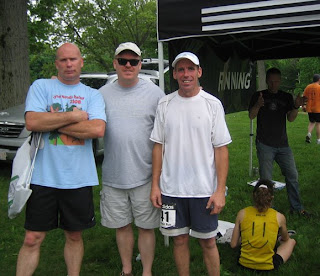 Some Lynn Woods folks (Mike and Paul) with Dave Menosky (in the middle), owner of Beverly's NE Running Company. I'm not sure what the Adidas guy is describing to the Somervile RR woman.
Posted by Trail Pixie Trespas

You should wear that cheetah skirt at Northfield. It will look good when i get you with the camera :)

I don't know if Cath would wear one, but that skirt is damn sexy! Nice double-race weekend.

Emily,
Thank you for telling me about your blog! Fun and interesting to read. Great seeing you today at Pack Monadnock. See you at the next one.
Diane