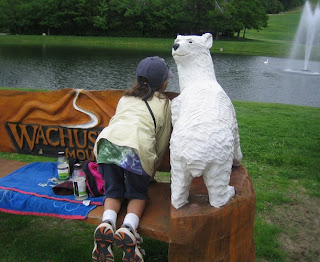 Wachusett Mountain is the first of six races in the 2009 Inov-8 USATF-NE Mountain Circuit. If you choose to run all six races you earn 2009 Mountain Goat status, which enables you to bypass the 2010 Mount Washington Road Race Lottery (refer to above link for details). The Circuit races prior to June 20th also help prepare runners—just a bit—for The Hill.
The NEW (and improved) Wachusett Mountain "Road" Race is 5.2 miles on a combination of pavement, single and double track trails with a dash of grassy ski slope. It's Trail Mix. I love that it challenges both road and trail runners over a variety of terrain. Heads up to road warriors: you will find more earth than asphalt.

Aspects of this course felt like the Northfield Mountain Race (which is also part of the mt. series) mainly because Wachusett, like Northfield ascends up the mountain before shooting down. One trail treat was the nearly half-a-mile stretch up Old Indian Trail. It's rocky, rooty and runnable though most of the folks I was near, including Trail Pixie, speed-hiked this part and ran in short bursts along the flatter sections. Along with the USATF course description, Double-d also detailed it in his Mountain Preview. I hope the RDs keep the course as it stands even after the road work is complete! Change can be good.
Results
Photos by Scott Mason
Photos by Ken Skier 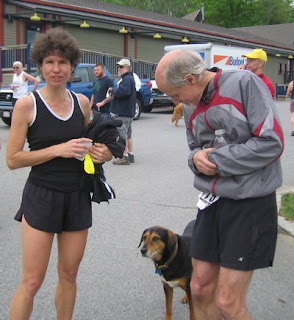 I went to Wachussett in Princeton, MA with Susanne, who is an avid cyclist, road marathoner & trail-curious. She's eager to try MWRR in 2010 so what better way to introduce her to trails and uphill running than through this series! Two Legs, One hill. (My play on: "two birds, one stone.") She pointed out how social the pre & post race is. I cherish this aspect of running and look forward to catching up with folks who also love the outdoors, trails, and have fascinating interests and stories to share. 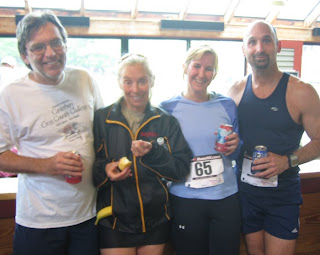 Many races have a reunion quality to them; this one was no different. I caught up with Richard & Jackie (newlyweds!), Donna & Fred (also newly wedded), Dima F & his posse (NETT), Brian G & Diane L, and Dan P and Melissa M, Tom P, Bob Sharkey & Sheba. While Sheba is a staple at the races, I spied some new feline fans. Heading to the start (sans camera) I fell paw-over-heals in cat-nip crazy love with two nearly identical DSH cats in a car. Their lucky driver was taking them to Maine for an adventure. Me-yow! 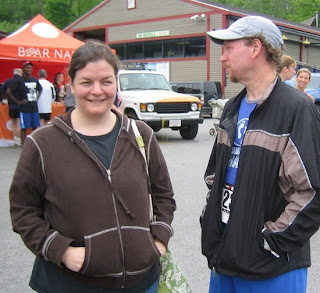 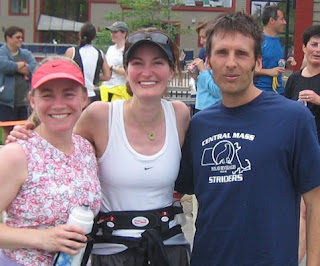 As planned, I linked up with kZ and Joy, who was running her first (?) mountain race. We chatted with Michael, Ginger and Tim VO (RunningRaw.com), as we each savored a delectable raw cookie-creation by Michael. He took these taupe-colored treasures from a wheelie cooler. Raw-on-a-Roll. Raw & Roll!

Michael, thank you for saving us from the Hostess HoHos.

Here's a little video of a young NETT finishing goat:

See you at the back of The Pack Monadnock.
Posted by Trail Pixie Trespas

Hey, that's my son in your first picture! :)
Isn't Tim VO great? I was so excited to meet him as a fellow raw runner. Maybe I'll see you at some other races!

Raw Body Goddess, Let's try to meet up at one of the next mountain races. From your blog post we already run close in time, though I will take the longer stuff much more slowly. Can't wait to meet and talk with you about your book(s). Your son was too cute next to this bear not to capture on film.

Totally fine about the pic :) He felt all special being in someone else's blog!