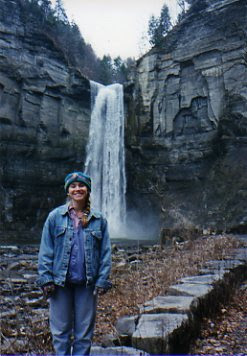 READ MY RACE REPORT HERE.
Recently I met some terrific running folks who talked me out of racing in Western Massachusetts and instead, into joining them in upstate New York for the GLER! This was not a hard sell because I am eager to run long (and slowly) in new places with ultra-friendly folks. What great fall marathon training, too! Plus I haven't been back to that area since the 1990s.

I'll play with Galloway's run:walk technique and aim to go the four (7.75-mile) laps, which is how I completed my first 50k with a smile. Still I must be cautious of my big toe I smashed a few weeks ago!

Way back in the age of "baggy-demin and over-sized fleece hats" I lived in Ithaca, New York, while in graduate school. (See my photo above, circa 1994, at Taughannock Falls State Park, Trumansburg, NY.) Not only did I not run then, I had no notion of running, trail running nor the Finger Lakes ultra-fanatics who scoured surrounding state parks.

Coincidence?
Earlier this month at a gym, I ran into someone with whom I lived while at Cornell but with whom I hadn't communicated in over 12 years! I reminisced about the paths I'd chosen since leaving Ithaca and the wealth of health and happiness running has contributed to my life since I started in the early 2000s. Full circle.

I decided to return to up state New York—a land of marathon printmaking-sessions, Saranac beer, Wegmans chocolate-covered espresso-bean coffee ice-cream, the Finger Lakes state parks and abundant memories—and take my path less traveled by. Time to make up for some "missed miles" and what miles to go before I sleep...

Whose woods these are I think I know.
His house is in the village though;
He will not see me stopping here
To watch his woods fill up with snow.

My little horse must think it queer
To stop without a farmhouse near
Between the woods and frozen lake
The darkest evening of the year.

He gives his harness bells a shake
To ask if there is some mistake.
The only other sound's the sweep
Of easy wind and downy flake.

Pixie! I love the picture of you at Taughannock. My daughter went for a swim not far from where your picture was taken. I had no idea you spent time in the Finger Lakes. My wife and daughter and I are usually there for about a week every year. I love the other gorges in the area, too. Robert Treman and Buttermilk Falls are favorites of mine. I can't wait to hear about your experience of Green Lakes.

Wow, good luck on the endurance run. Are you ready?

Streph- small GORGEous world! I want to go back and explore the area more now that I am a trail runner! We could someday coorinate when you family is there, too.

Meg- I hope I am ready! It will be a fun slow day. I can't wait to see the area and the trails and the lakes and the other runners.