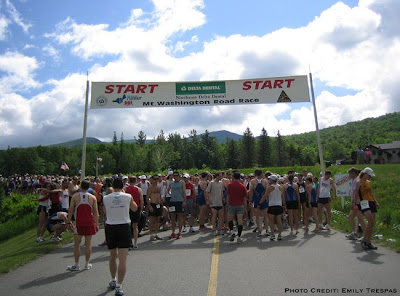 Start of the 2008 MWRR
Was it good fortune that my lottery entry was selected for the 2009 Mount Washington Road Race? I believe & hope so. I captured the above photo and video of the 2008 MWRR start when I went with Paul who had an extraordinary run! To see the video I captured of the start click here.

I ran the MWRR in 2004—on a last-minute bib number from an old running club (RR)—with less than a month to train for the event. An MVS track coach at the time joked, "You can't train for Mount Washington!" While I don't believe this today, I understood what he meant as I was merely three weeks from an 7.6 mile uphill battle! In 2004, I arrived at the the base of the auto road with no finishing time in mind, just the goal to have fun.

What a blast. I ran, power-walked, took pictures, laughed & talked with folks. But I don't know that guy in the yellow jacket. Just before the start, it poured and then the sun came out, the temperature rose but dropped again. Beyond the half-way point the wind picked up, unleashed some hail before blanketing the summit in a thick fog. Thank goodness for those cow bells; visibility was approximately 10 feet. Afterwards in the summit house, I was pretty gleefully glazed (above, in red).

The same day as the 2004 MWRR over 100 mini coopers raced to the summit.
Notice how stormy it is! The following day: sun, clear skies & happy clouds (on right).
What a difference a day makes.
My main goal for 2009 is to have fun. Seeing I haven't participated in this event since 2004, I'll be curious to see how five years of mostly trail running makes a difference. I might have lost speed but I gained endurance. Some other goals include arriving healthy & injury free for the start (& after), training through the mountain series, and sharing the experience with friends old and new. 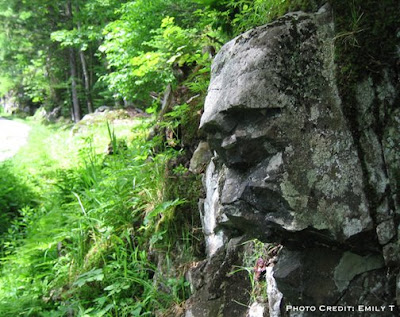 Last year I hiked up the auto road a few miles after the racers were well into their ascent. I saw this profile in a rock that reminded me of the Old Man of the Mountain. This is my "mini" Man of the Mountain. All I know is that when I see his frown in June 2009 I will have a good chuckle.
Posted by Trail Pixie Trespas

You'll run well and have fun in the process. Good Luck!

I am so jealous! I did not get in! Bummer! Have fun and if you hear about a loose number please keep me in mind:) Ana

Ana, check with running clubs (e.g., MVS) about volunteering opportunities and they may have extra #'s. Since 2004 I've tried the lottery two or three times and didn't make it, so I can relate to your disappointment. Things happen for reasons about which I am not clear. This year I am in. Okay...only one way but up up up! I'll dedicate a mile to you! I am eager to see how awesomely you run Boston!!!