An open field with blooming trees
(Ward Reservation, Andover, Mass.)
After teaching this morning, I laced up, filled up my Nathan hydration pack and headed out along the Bay Circuit Trail to meet up with Dan and Bill who'd started (Leg #3) in Boxford earlier.
I am fortunate to live within walking/running distance of the inviting white rectangular blazes so all I had to do was gear up and go.  As I headed out, I confirmed Dan and Bill's approximate location to estimate where I might intercept them running in my direction. I hoped to meet them at or after the Mary French Reservation so I could run the beautiful boardwalk twice. Success! I intercepted the duo in the Hammond Reservation and we headed back over the Mary French boardwalk. The memorial bench looked as though it had been recently restored. We admired it and were off like cat and mouse through the cat tails. Dan put away the map because their local guide was leading the way! 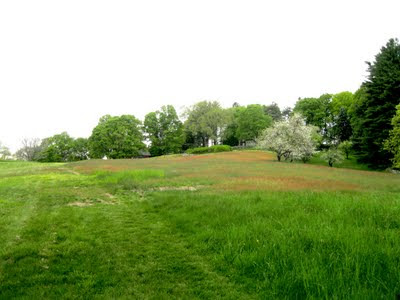 The field by my favorite home in Andover (Ward Reservation)
The stretch of Conservation Commission trail that connects Grey and Tucker Roads has some new board walk over the muddier areas. Then into Ward.  I feel so great when I run in Ward Reservation. This Trustees of the Reservation land is my main "stomping" ground. I don't actually "stomp;" my gait is more of a scooting and skipping combination.
Stomping in Hokas must be next to impossible;
they are light and poofy like cumulus clouds. 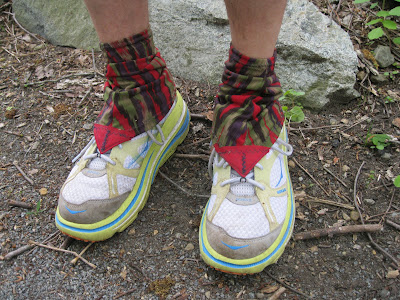 After Ward, our trio trekked through the Phillips Academy playing fields and down Phillips Street before ducking into the Purdon Reservation.  Bill parked at the Lupine Trail head, which is less than a mile from Purdon. In a jiffy we were off to chit chat with Al French and Burt Batchelder at Moor & Mountain! What great local resources—these men  and the outdoor gear!
Dan and Bill logged about 17.5 miles, estimating re-routed trail (due to avoid beaver-flooding) added the extra 3-4 miles difference from the BCT written route map. With my out (to meet them) and back (to Bill's car at Lupine) I logged 9.5 miles, feeling fine.

Great Company!!! I am eager accompany Dan, et al., along the next leg. Section #4 shares trails through a handful of my  favorite A.V.I.S. Reservations: Indian Ridge and West Parish. 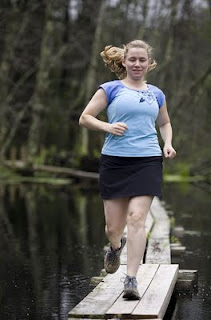