Biking, Birding Before the Rain

Late morning I hopped on my bike and headed towards Boxford. The weather was cool, overcast and rain free—at least at the start. I was not out for a "hammer fest" but a chance to move my legs, enjoy the outdoors, and  try out some new cycling gear. Happily, I managed to average 15.6 mph without trying.
Initially, I was in search of a cider donut from Smolak Farms Bakery but I realized that was just the initial bait I told myself for motivation before I switched to another goal. As soon as I was warmed up by Old North Andover Center I decided to find the road that touts one beautiful field, farm and  barn after another. I found it and a whole lot more... 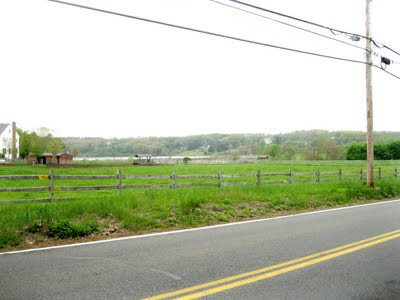 Looking toward Hovey's Pond along Main Street in West Boxford
I stopped to take this photo and was on my way. Until I saw an arrow and what appeared to be a trail head. Insatiably curious, I circled back, dismounted and walked down the pebbled path. A bunch of birders were clustered by the water's edge while one tall man in a navy wide-brimmed rain hat pointed towards the cat tails. The others raised and lowered binoculars before passing them with slight hesitation like a tray of delectable appetizers at a garden party. 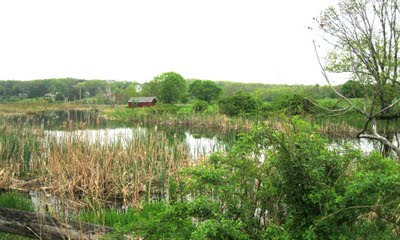 The Millbrook Area by Hovey's Pond was alive with wild chirping bird activity—songs, courting rituals, and sky acrobatics.  I spotted several chatty Red-Winged Blackbirds, a sparrow, a bright yellow fellow (Oriole? Warbler?), and a Killdeer that was in some sort of a twirling tizzy. So much excitement in just a few moments time.

The birding group was about to disband when I arrived but a few die-hard birders perched around to try and spot the Bittern who was camouflaged (as usual) amidst the tall grass. Of course, we could hear the unusual call but not see this master of disguise.

A really nice man, a member of the Merrimack Valley Bird Club, offered me some of his home-baked "flax seed, oats and etc., squares." It was the best thing like it that I'd ever tasted. I want that recipe! He also offered me a rain poncho because the sky decided it was time for the deluge.  I had my cycling jacket but many thanks, sir. I'm sorry I didn't get your name. 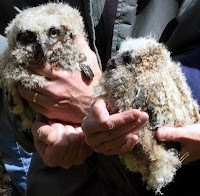 I learned that earlier one of the men, climbed a tree to band some baby owls, called "owlets." I wonder if these were the infamous Great Horned Owls of Brooks School? Was it Jack Holt?
Curiouser and curiouser...
I need to get into the woods more.
I heart owlets.
(owlet image source: http://www.brooksschool.org/podium/default.aspx?t=204&tn=The+Latest+Campus+Celebs&nid=545739&ptid=51725&sdb=False&pf=pgr&mode=0&vcm=False)
Posted by Trail Pixie Trespas