Busy at the Beaver Brook 5k 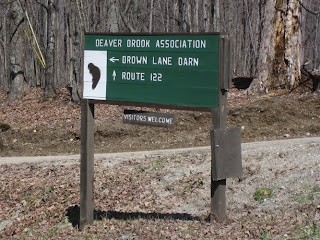 What a busy weekend! With spring fever in the air, I headed to Hollis, NH, for the Beaver Brook 5k. This race was appealing because it was held entirely on trails, was nearby and the race shirt had a beaver on it.

The secret is out; I am working on my "woodland friends" race t-shirt collection!

Held in Beaver Brook Association—with a wooden foot bridge and a small water crossing—the race was just shy of a 5k. The out & back course started with a fast down hill and ended with the same long "not-as-fast" uphill. Before the start the RD, Michael (of 3CRace Productions), motivated us to run quickly else THE GIANT "man-eating" beaver might catch us! 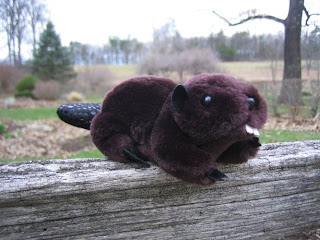 Dam wouldn't you know it, on my way back I thought I saw some swamp activity between a giant beaver and one of the runner's dogs; they were in a tug-of-war over a fallen tree branch. Then I spotted this non-threatening young kit in the parking lot. What's going on?
These photos capture some pre- & post race milling about and a doggy head count. I think all pooches made it out of the woods—except for one (but he got that branch). 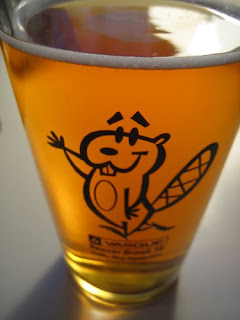 Despite knowing that beavers are herbivores, I managed to run faster than I set out to and landed second woman overall. Where did that come from? Eerr, did you know that beavers can swim up to five miles per hour?

Beavers can also remain underwater for 15 minutes without surfacing. This was a relief because I submerged this one under a "21+" beverage in my new pint glass. For more beaver information chew on this: National Geographic or Beaver Pictures & Facts.

The Beaver Brook 5k was an adventurous, low-key, trail race that proved an excellent work-out for both seasoned and first-time trail runners! Thanks for rescheduling it.

Congrats on the 2nd place finish. Maybe 1st if you didn't take the 3 hour tour of DRB the day before. Love the little doggie runners!

Great picture of the Rhodesian Ridgeback. One of my dogs, Madison, is a mix of Ridgeback and Catahoula. When she was a younger dog (now 10) she could run with me in the Florida heat for 4-5 miles easy (don't worry I always brought water for her). They are also fantastic dogs to bring along mountain biking.

Great job. They also hold a 5K snowshoe race on the same trails that you'll have to run next year.

Congrats on placing second. Even more impressive that you did so well after having run so long on Saturday! Ana-Maria

Thanks All! I was pleasantly surprised by many things--the number of cute canines participating in the BB 5k, the bella woods, and my finishing place. I thought I'd run around 26 minutes. Dan, yes, it must have been the 3-hour DRB hike. WOah. Quads are sore today, yes indeedy.
Brian G and I ran the course as a warm up, so I (unfortunately) knew what was ahead. During the race, I managed 10-15 feet behind the lead female for 2/3 of the race but she pulled ahead on the long uphill that I power-walked. Oh, I think the only reason I placed 2nd was because Diane L (Brian's squeeze) was at Great Bay Half! Hinchu, the Rhodesian R was so pleasant and with a strong physique!

OMG That is my stomping ground and I had no idea there was a race there!!!! I have spent the last 10 years covering every section of Beaver Brook by foot or bike I am soooo bummed I missed it, but so happy you had a wonderful race...congrats on your palcement..you rock chika!!!!