Once A Runner: Back in Print 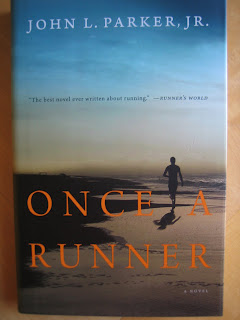 With great anticipation,
Once A Runner, by John L. Parker, Jr., is back in print.

On July 12, 2008, I excitedly pre-ordered a copy from the publisher, Simon & Schuster, and awaited its release. I'd waited long before—in vain—for a missing library copy to magically re-appear. Also, past years were dog-eared by hopeful searches through donated books at second-hand shops. Alas. April 7, 2009, rolled around and I received word. My copy was on its way!
Back in 2004, I saw the book's inviting title with its cover featuring a shirtless (buff) man in shorts gazing through a window. This, of course, was the earlier (1990) edition of Once A Runner.

I almost purchased it on the spot for under $20. Little did I know that it would be impossible to find for sale (at an affordable price) or pilfered from library shelves prohibiting borrowing! By 2007, the novel "ranked as the number one most sought-after out-of-print book in the United States."
"Originally self-published [by Parker] in 1978 and sold at road races out of the trunk of the author's car....," who would have predicted its monetary value as a collector's item would soar so high—in addition to its inspiring influence in the running community as a piece of literature. Thanks to Simon & Schuster we can keep the dream alive. Quentin Cassidy, here I come.
For the 2009 edition, check your local bookstore, the publisher Simon & Schuster, or Amazon.
Posted by Trail Pixie Trespas

I am reading it right now. Great book:) Ana-Maria

Glad to hear your copy is on its way. I purchased mine on a recomendation from Petey (race director of Merrimack 10) some 15+ years ago. I read it about once a year. It's a fun, quick read.

Just ordered it from Amazon!!!Thanks for the ehads up about it...also ordered The Athletes Way...It is amazing and I want to reread it : )

I may see you sat at the Otter race with my niece Kelsey : )

My library in Tampa has ordered 5 copies. I'm waiting for mine.