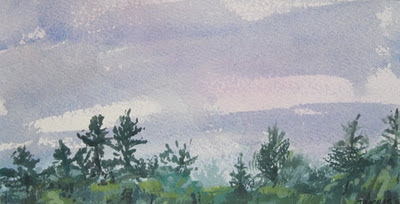 (Trespas, "Dusk" watercolor & gouache, en plein air 2011)
Well, I've been very busy this fall spending a lot of time outside, this alleviates the urge to hibernate a bit and makes the shortening of the daylight more bearable.


After my 40 mile effort at the TARC 12- hour (mid-August) I took a few weeks off  from blogging, power-walking and running and instead I painted, gardened and helped my folks move. By the beginning of September my feet were fidgety and I met up with Kevin Z at the Wapack Race for a fast hike along the Wapack Trail from Windblown to Watatic parking lot. It was clear this was going to be the last opportunity I would have to spend any extended time with KZ before he relocated. We talked and joked and had a grand old time along that seasoned trail. After 9 hot and humid miles, I was cooked and we hitched a ride back to the start. We saw many folks finishing their 18+ mile race and met Julie O and Bill H for an intimate fete.
The Wapack power-hike showed me that if I am "going to get going I best get going." I am registered for the Stone Cat Trail Marathon, I figured that mid-September might be a good time to start longer runs. End-of-September brought 12 miles of wogging through local conservation lands (AVIS and the BCT) the day before my Seacoast Century Ride (100k). This proved to be a complementary endurance pairing! Weather, work and health permitting— Sat. and Sun. back-to-backs would be the theme for weekend training.

Next weekend it was onto the TARC half-marathon; that course was more difficult than I anticipated but good slower to medium effort training regardless! The best part was I got to see many of my TUG pals and catch up with them as I've been out-of-da-loop!
The following day I chaperoned a student trip with a fellow colleague Mika L-K to the UNO Boulderdash Orienteering Event in Bear Brook State Park. What a sunny beautiful day! I completed a recreational course and had a blast running through the woods like a bobcat. Improving my orienteering skills is a goal of mine for 2012! After talking to Clint M. and his family (who basically owned the results through multiple age groups!) encouraged me, "A little training can go a long way."   I have the trail and woods running down not I just need to refine my map-reading and compass skills. (Photo: Clint and I at the UNO Boulderdash)
The following weekend I could not couple Saturday and Sunday long events because Saturday morning I was possessed by a food poisoning devil. Yuck. I thought I was going to die. I was too weak to move off the bathroom floor for a few hours. So when I am whimpering because my hips hurt climbing over rocks  I will remember that morning un-fondly and know it could be a lot worse.  After exorcising the demons I drove north and warmed by the wood stove while Dave nursed me back to health. On Sunday I was better-than-butter and went out to the Harris Center in Hancock and explored all of their trails and some Tree Farms. I (accidentally and without confrontation) lived up to my surname and trespassed a little, too. Woopsy-doodle. 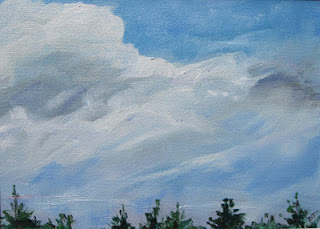 (Trespas, cloud study, oil on canvas, plein air painting, 2011)
Getting Sort of Lost. That  trail was supposed to be well-marked with white circles but was not. Bummerrrr. I'd already been out a few hours so I cursed the mountain, thanked the cairns and determined I was done and heading back to the car as soon as I knew where the knuckle-sandwich I was. When I reached the top I found a young mom and her two toddlers —dressed in playful polka-dot parkas—Letterboxing. One curious little pink-gloved hand began to wave her stamp around as she asked, "Are you sweating?" and the other girl with more motor skills (certainly more than me at that point) stated, "you ran up that? woah." Yay, happy Letterboxers! And I was on my way; all was well again. It's amazing how the universe can present happy things just in time. 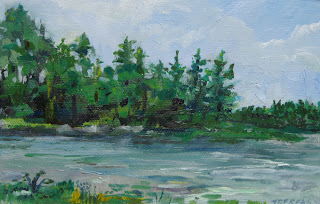 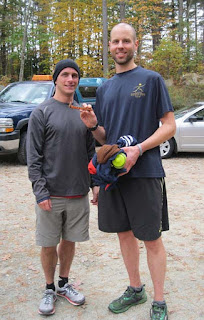 After a long week at work and running many hours at a time, I needed a new and relatively flattish terrain on which to run.  On Sunday I enjoyed the crisp air and fast course of the Ghost Trail Rail Trail Race, in Brookline, NH. I opted for "the shorty" and was glad I did as I got to meet some new running folks— Jeff R and his car mates: Jen and the iron man in his mid-60s. I enjoyed catching up with Jen F (thanks for wearing the Gator-Bait Gaiters!) and Melanie. I missed being out there with my ultra pals (Steve L, Norm S.  Officer D and Lil Royster) but knew they had a cold spooky night and were off repairing their garlic garlands.  I snapped this composed photo of Jeff Lane after he finished his 100 miles! Seeing him and Greg  (40+ miles) out on the course several times made the lonely long haunted passages plagued by ghosts and talking Jack-O-Lanterns less foreboding. (Photo: Greg E and Jeff L after the Ghost 100)
Monday I went for a walk to free the dead from my legs and extensively explored the woods by Dave's.  What's an outing for this Trail Pixie if I don't get lost? I found myself bushwhacking up the side of the mountain using a stone wall and a stream to find the Class A road that led back to the farm. Home, Sweet Home. 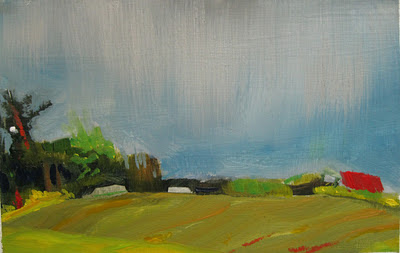 (Trespas, Just Over There, oil on canvas, plein air painting 2011)
Thanks to Jeff R for the motivation to post again!
Posted by Trail Pixie Trespas 2 comments: