With the nearby  Granite State Snowshoe Series underway, I'm emerging from hibernation to run some events with Dungeon Rock Racing.  Last weekend's race at the Feel Good Farm in Lyndeborough, NH, proved to be a positive learning adventure: 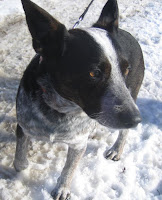 This pup is all ears because the race benefited the Happy Valley Animal Rehab. 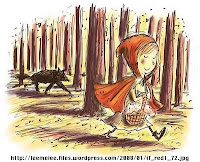 Steve  and I lined up behind everyone else. We kept it conversational for our warm up together (eeer...warming up is the first mile of the race, right?). We laughed our way over the river and through the woods. We didn't get to grandma's house but I  was encountered by a "wolf" at one point!

Steve is an animal (but not a wolf). He was on fire. In fact, I believe he melted the snow.  His competitive side kicked in and he dashed away—leaving me (and Dan) to snow drift.  Still, my conservative start earned a negative second lap as I passed several folks on the downhill and finished happy.  The cauldron of Portuguese Kale Soup at the finish line sure felt like being at Grandma's! 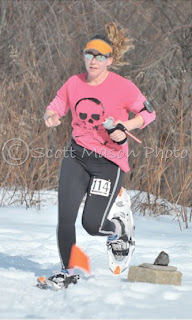 My what big snowshoes you have!

Photo above by  Scott Mason Photography.

I'm very impressed you ran negative splits on that very difficult course. My splits were negative too, meaning they got worse with every mile.

I discovered your site and read some of the older posts. Found it very interesting! keep it up!