Having a Ball: The Early Girls

Yesterday we canned a batch of Tomatoes! 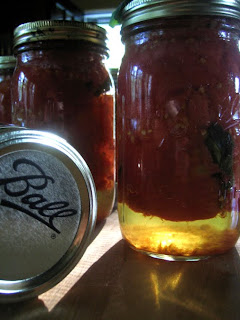 2. Prepare the Fruit & Herbs:
Meanwhile, use a third pot to boil more water. When boiling, dunk three tomatoes at a time for about 20 seconds or until their skin bursts. Remove with tongs peel away skin and cut away parts you don’t want to eat later, such as tough middle section or stem parts. Place cleaned tomatoes in a bowl until ready to can. Prepare all tomatoes in this fashion. Cut and clean any herbs, such as Basil.

3. Preparing Jars for Fruit:
Depending on size, about three to five tomatoes will fit into a large Ball jar. After jars have boiled for 30 minutes, use rubber gloves and tongs to remove a jar (one-at-a-time) from water (try not to touch jar; it’s hot)! Pour out boiling water from inside of jar. Try to keep rim of jar as clean as possible as you gently drop tomatoes into the container. Alternate tomato with basil as you fill. Do not overfill. Use a knife to cut up the tomatoes a bit so you can pack them in. Do not cover yet. Set jar aside. Repeat until all fruit's been used.
4. Sealing The Jars:
When all jars have been filled, DRY OFF their RIMS with a clean cloth so the cap gets a great seal. Remove the lids and caps from hot (no longer boiling) water with tongs. Place cap onto clean dry jar rim and then add a lid and twist. As Dave puts it, " don’t “REEF” on them" but tighten medium firmly. 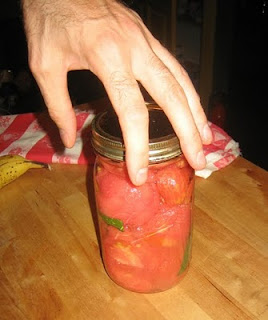 5. Back to the Water to Sterilize Again:
Remove about half of the water from the large canning pot. Place the bottles (with lids/caps on) back into their holder and into the hot —BUT NOT BOILING— water (that would break the jars, which have cooled somewhat). When all bottles have been placed, add more warm-hot water to the pot. Cover the Ball jars by about an inch. Bring the entire pot back up to a boil. When the water begins to roll & boil, start the timer FOR 30 MINUTES.

6. Finishing Up—Removing & Cooling:
After 30 minutes of continuous boiling, remove each jar from the water. Tighten the lids down (now you may "REEF"). Dry jars with a cloth & set aside. Repeat. 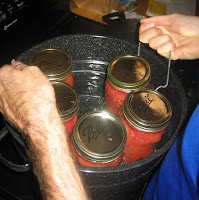 As the jars’ contents cool the lid will vacuum seal down and the lids will drop to a concave state. If a lid did not drop concavely, then the canning process was NOT a success and you should use that jar’s contents in the next day or two.
If the concave seal was successful place them in your canning cupboard— for up to six months—or until ready for use. 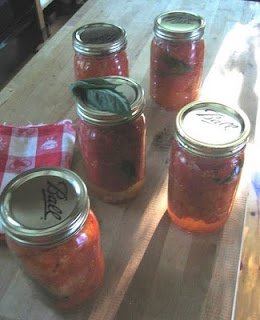 I just canned 16 pints of blueberry preserves! Sounds like you are having a great summer my friend ;)

J-send me the recipe/instructions, if you get a chance. Have you done peaches?